The principle that all firms—whether private sector or state-owned and controlled—should be treated equally in China was enunciated by Premier Li Keqiang last year in his 2019 Government Work Report before the National People’s Congress. But the latest data show that China’s private companies have suffered stronger challenges than their state-owned counterparts from the COVID-19 epidemic, despite the multiple highly targeted policy measures the government has adopted. Unless this bias changes, China’s economic recovery from COVID-19 will be delayed.

Private firms produce about two-thirds of China’s output, and the disproportionate losses of the private sector were among the biggest causes of China’s historic GDP contraction of 6.8 percent in the first quarter of 2020.

Private exporters also suffered more than state-owned exporters. In the first quarter, measuring in renminbi, exports by state firms contracted 9.4 percent over last year, while exports by private firms declined by 6.9 percent. However, since nearly half of China’s merchandise exports are made by private firms, and only 10 percent by state firms (the remaining 40 percent is by foreign-invested companies), the aggregate hit to private exporters was more than three times larger than state exporters.

All the evidence above points to the relatively harder hit that private enterprises in China have taken during the COVID-19 outbreak. It is almost certain that unequal access to credit in the private sector, which slowed production and thus weakened revenue growth and private investment, was among the most important factors at play. The Chinese government recently rolled out a document on letting the market lead resource allocation in the economy by promoting reforms across the board. This is an encouraging sign, but the first and foremost reform needed to realize market-led resource allocation is to ensure state and private enterprises have equal use of the factors of production, a balance that is still lacking in China. 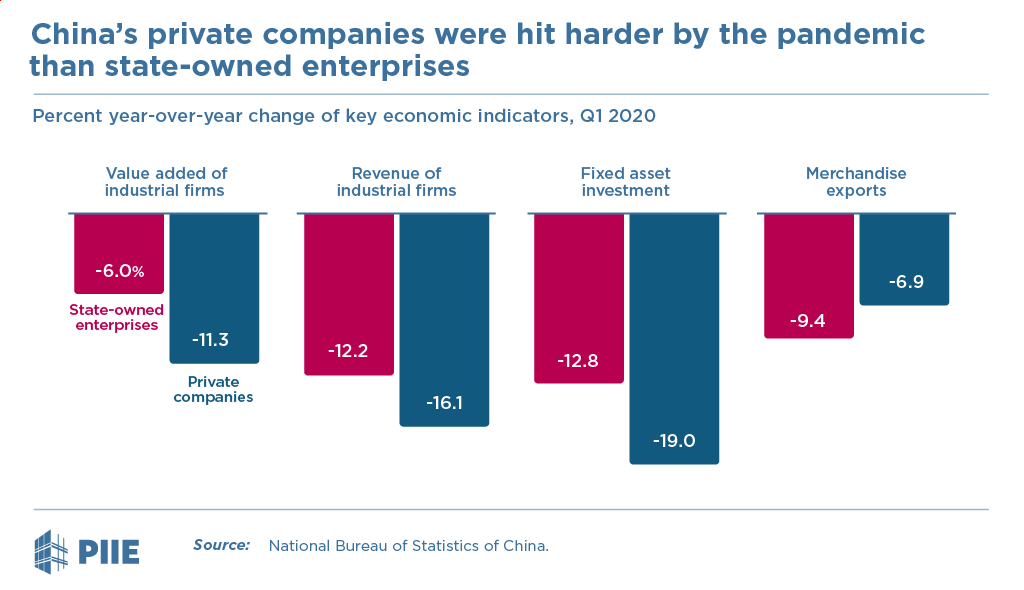 Lessons from East Asia and Pacific on taming the pandemic

China goes from strength to strength in global trade

Bricks and mortar in the BRICs