Lagging productivity growth, defined as economic output per hour worked, ranks among the serious problems impeding economic expansion in the US and other advanced economies. Many economists advocate high-pressure macroeconomic policy—in the form of large federal deficits and low (2 percent or less) interest rates. But do such policies, which can translate into faster job creation, actually spur productivity growth, which is a major factor in whether wages rise? The evidence presented here suggests that high-pressure macroeconomic policies make only a small contribution.

Of course, faster job creation has other virtues—especially pulling new and discouraged workers into the labor market—but raising productivity requires additional policies. Without those policies, the United States is unlikely to achieve the 3.1 percent annual GDP growth rate for 2020 optimistically assumed in President Donald Trump's budget for FY2021 (table S-9), or an average of nearly 3 percent over the next decade. 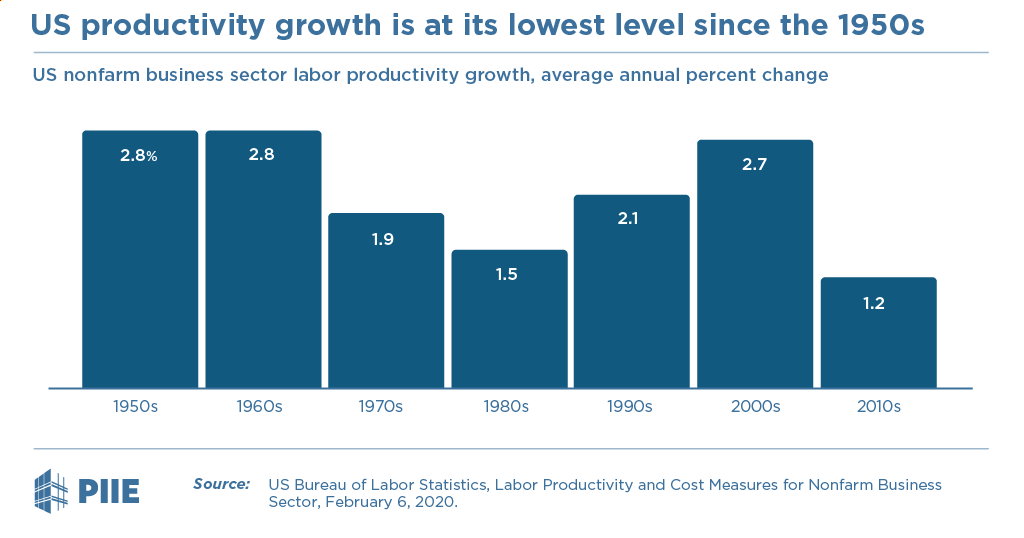 Most economists hold that the productivity growth decline is real, and various explanations have been offered. In The Rise and Fall of American Growth, published in 2016, economist Robert J. Gordon of Northwestern University famously argued that innovations in recent decades simply lack the impact on worker productivity of innovations in earlier eras. Notwithstanding the marvels of computers, the internet, and robotics, these latter-day innovations do not compare, in productivity-enhancing terms, with innovations of an earlier era—for example, the assembly line, hybrid corn, or rapid transportation.

Other economists contend that the latest technologies offer tremendous promise but are slow to diffuse among firms. One possible channel of diffusion: pressure on firms created by high job openings relative to the number of unemployed workers. The hypothesis is simple: When employers are short of workers and post more job openings as a recruiting technique, they may also search harder for incremental innovations to improve productivity with a given labor force. A contrary hypothesis would suggest that during a recession—when companies post few job openings and unemployment is high—inefficient firms close and surviving firms cut costs, thereby raising productivity.2

The standard measure of labor-market tightness is the relationship between job vacancies and unemployment.3 Accordingly, we define the independent variable vacancy ratio as4

Since some of the openings may represent the same unfilled position month-to-month, we take the average to minimize possible skewness due to duplicate counting. The regression equation is therefore:

During the period under consideration, the lowest national vacancy ratio was 0.22 in 2009, and the highest national ratio was 1.01 in 2017. Looking at differences between states, in 2015, when the national vacancy ratio was 0.77, the highest state was North Dakota with a ratio of 1.63, and the lowest was New Jersey with a ratio of 0.48. The coefficient β in the regression equation was positive at 0.008 but was statistically insignificant (p-value = 0.45) with a 95 percent confidence interval of [–0.01, 0.03]. An alternative regression equation specification, using the ratio between job openings and the civilian labor force, likewise yielded a statistically insignificant value for β. These results suggest that neither good times nor hard times boost productivity as a general matter, even though contrary results are found in select post-recession periods.6

Approaches other than high-pressure macro policies can better tackle the productivity growth problem. Measures to stimulate investment in R&D, physical plant and infrastructure are obvious, even though they would entail larger budget deficits or higher taxes. In high-tech sectors, antitrust actions might promote faster diffusion. Elsewhere we have argued that greater trade liberalization would contribute by promoting two-way trade growth. Based on results reported in this blog, we conclude that high-pressure macroeconomic policies should be pursued for reasons other than an imagined boost to productivity.

An important implication is this: Even if US unemployment stays at record low levels thanks to low interest rates and large budget deficits, annual US GDP growth is unlikely to attain the near 3 percent long-term target assumed in President Trump's budget for FY2021. Long-term GDP growth is the product of growth in the total number of hours worked, projected by the CBO at 0.2 percent over the next decade, plus growth in labor productivity, projected by the CBO at 1.8 percent over the next decade, plus a small interactive term. We find no evidence that high job openings and low unemployment will boost the productivity growth rate to 2.8 percent and thereby achieve President Trump's long-term growth target near 3 percent. Perhaps fortuitous factors, such as widespread adoption of digital technologies, artificial intelligence, and robotics, will push productivity growth to 2.8 percent in the 2020s, but high-pressure macro policy, by itself, seems unlikely to do the trick.

* Zhiyao (Lucy) Lu was a research analyst at PIIE from March 2016 to February 2019. Views expressed here are solely her own and do not represent those of her employer.

1. See, as well, the symposium in The International Economy, volume XXXIII, number 4 (Fall 2019).

2. Olivier Blanchard surveys the literature relating recessions to productivity. According to the literature under review, recessions may influence productivity through three channels: (1) decline in capital stock; (2) speed of adoption of innovations; and (3) reallocation of resources. As for this last channel, Blanchard cites Foster, Grim, and Haltiwanger, who found positive and large effects of reallocation due to recessions on productivity growth (gains of 0.4 to 0.8 percent). This is consistent with Blanchard's own estimation, which found some positive productivity gaps, up to 0.056 percent in the long run, in a sample examining 22 advanced-country recessions induced by policy disinflation. Studies exploring the first two channels cited by Blanchard found negative productivity effects from recessions.

3. The Diamond-Mortensen-Pissarides (DMP) model formalizes the concept of labor-market tightness as the job vacancy to unemployment ratio. See, for example, Dale Mortensen and Christopher A. Pissarides, Job Creation and Job Destruction in the Theory of Unemployment, Review of Economic Studies 61 (1994).

5. This pooled ordinary least squares (OLS) model does not account for the spillover effect of job market tightness across states. Labor mobility across states may play a role in smoothing out the state-level correlation between vacancy ratio and productivity growth. Recent research documents declining labor market fluidity within the United States since the 1990s [see, for example, Raven Molloy, Riccardo Trezzi, Christopher L. Smith, and Abigail Wozniak, Understanding Declining Fluidity in the U.S. Labor Market (2016) and Steven J. Davis and John Haltiwanger, Labor Market Fluidity and Economic Performance (2014)]. Since the sample period is 2008–17, we think the spillover effect would be limited.

6. See the summary of Blanchard's results in footnote 2. Note that the correlation coefficient between the (job openings/labor force) variable and the (job openings/unemployment) variable is 0.82, so it is not surprising that the two regression equation specifications both yield statistically insignificant results.

The Benefits of a Hot Economy

The Economic Benefits of Latino Immigration: How the Migrant Hispanic Population’s Demographic Characteristics Contribute to US Growth