Can India's Power Problems Be Solved?

In Lord Richard Attenborough's movie Gandhi, an underling of the British Empire heatedly warns his supercilious boss that Mahatma Gandhi's impending protest march to the sea poses a far greater threat than the Raj realizes: "Salt, sir, is a symbol." This elicits the memorable sneering put-down from the boss (played by Sir John Gielgud): "Don't patronize me, Charles."

Is power, or rather the power sector, today's salt—emblematic of both the pessimistic outlook and promise of India?

The epic blackouts affecting 600 million people in India were of course a tragedy. But the greater tragedy is not the blackout but the chronic shortage of power in India, which exacts vast physical and social costs in people's day-to-day lives. Outside of the metropolises, for example, power is unavailable for much of the day in large parts of rural India.

In addition, there are the costs to industry, which has to pay higher prices for power to compensate for the massive subsidization of farmers and other low-income users. In turn, these higher costs make the private sector less competitive, slowing economic growth. Finally, there are the massive and accumulating costs to the environment from government-subsidized power, which has encouraged tube-well based irrigation, especially in the Northern farm belt, a practice that has dried up aquifers and drained water tables. The use of diesel-powered generators, by the more affluent, to make up for the lack of power or interrupted power further aggravates the environmental problem because of the buildup of carbon dioxide.

Power is, of course, a key component of Indian infrastructure. The problems in power, as in much of the economy, have multiple causes but a key one is poor governance. This ranges from corruption and venality—when politicians encourage power theft or diversion of power to their constituencies—to pandering politics in which politicians provide cheap or free power to farmers and other groups in exchange for support. There are also problems of power lost naturally in the process of transmission and distribution or when laws against theft are not enforced. (Power production is affected by problems in the coal sector, including a public monopoly, and the difficulties of mining for coal in areas affected by Maoist-style insurrection.)

In an academic paper of a few years ago, I argued that one of the better measures of the quality of governance in the Indian states was the performance of the power sector. And the quantitative indicator that I chose to measure performance was the transmission and distribution (T&D) losses of the state electricity boards. In areas where T&D losses are high, the quality of power, as reflected in the voltage as well as reliability, is low. T&D losses, ultimately reflect state-level political decisions—their unwillingness to enforce laws, and the phenomenon of state electricity boards controlled by bureaucrats and politicians corrupted by powerful private interests.

Now, these T&D losses in India are substantially greater than in other emerging market countries, highlighting the drag exerted by the power sector on India's economic prospects. As figure 1 shows, compared to a number of emerging markets, India's power sector is substantially more inefficient. For example, compared to China, the proportion of power output that is lost in India is five times greater. The gap between India and competitor countries in power that the figure illustrates is true for infrastructure more broadly.

(transmission and distribution losses as percent of power output)

What is interesting also is the relationship between governance in the power sector and the performance of the states within India. Figure 2 below plots the relationship between a state's economic growth (measured as the growth in state net domestic product per capita between 1993 and 2009, broadly the reform period in India, on the y-axis) and the state's transmission and distribution losses in the power sector (on the x-axis). The association is strong, suggesting that states that do poorly in the power sector because of weak governance also do poorly more broadly. (This association also holds for earlier periods.) 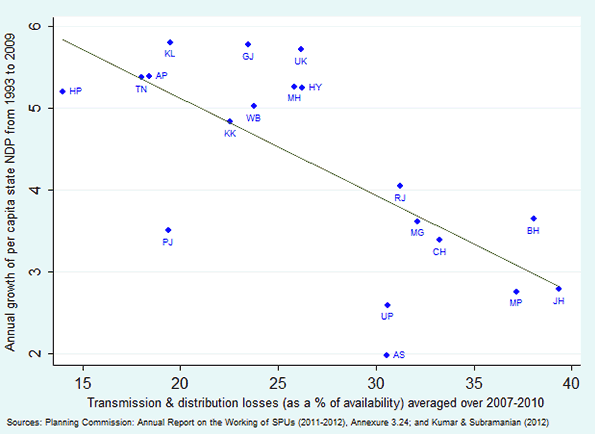 These arguments suggest strong grounds for pessimism. Where is the promise? There has always been a mystery about the politics of the power sector. Successive governments in India at the central and state levels have considered populism—the promise of cheap or subsidized power—an effective strategy. But the consequence has been either no power or highly interrupted power for a vast majority of Indians.

Why has the Indian voter fallen for this demonstrably non-credible promise by the politician? Put differently, why hasn't a politician seen the possibility of delivering steady and reliable power as a superior electoral strategy? Consumers, even the poor, would be willing to pay for power if they could be assured that it would be there. And, if consumers pay for power, there might even be a flood of private investment that is now deterred by the mess resulting from populist politics.

The good news is that greater decentralization in power sector decision making opens up the opportunities for interesting experimentation by the states. And some of this is happening. Tamil Nadu in the southern tip of India is investing in nuclear power; Gujarat, in the west, is considering giving farmers a choice between more expensive but steady power and cheap but uncertain power; and a number of states and cities have privatized, or are contemplating privatizing, the distribution of power, which would allow more effective metering of power usage and facilitate payment by consumers.

None of these experiments is close to being successful and worthy of emulation by others. But, in a perverse way, one of the benefits from the tragedy of the recent blackouts might be the impetus to break with the status quo and force state governments to be more responsive by being more bold.

The power sector and addressing its problems are critical for India in two respects. Like salt in the 1930s, power has become a necessity for ordinary Indians and an integral part of the rising expectations that Indian dynamism must satisfy. More importantly, if India could "crack" power, it would address the bigger problem of severing the link—actual and perceived—between (costly) populism and electoral success.

Saying to a latter day politician that power is a symbol should not provoke the Gielgud snub. It should provoke political action.

Worrisome Economic Consequences from the Unrest in Egypt