How Europe is taking another page from US financial history

As the European Union begins to contemplate how its perhaps €500 billion new joint debt to help the economy recover from the pandemic will eventually be repaid, a profound fiscal question arises. Will new sources of direct EU revenues be agreed to repay the debts, or will member states be asked to contribute more funds to do so? Europe, ironically, can once again turn to US history, this time from the 19th and early 20th centuries, when the federal government had not yet acquired the right to levy direct income taxes on Americans.

By far the most important source of government revenues in advanced democratic economies comes in the form of the taxes levied on the incomes and consumption of the resident population. And a relatively straightforward relationship exists between the level of taxation that people willingly allow their elected governments to extract from them and the strength of their self identity at the taxing level of government.

European level government, however, does not possess this kind of public allegiance. Europeans tend to self-identify as Dutch, German, Italian, Spanish, etc.—and hence the European Union does not have the ability to directly tax Europeans. Despite the increasing governmental tasks now carried out by the European Union, it is invariably at a revenue and resource disadvantage and gets over three quarters of its budget revenues directly from member states.

Devising lasting and sizable sources of new “direct EU revenue” (called “traditional own resources,” or TOR, in EU budget speak) has therefore always been an important political goal for policymakers seeking to strengthen the central governing capacity of the EU. Presently, the only direct EU revenues in the EU budget comes from the customs duties paid directly to the EU, as trade policy is an EU level responsibility, and so-called “other revenue” made up of tax and other deductions from EU staff income (i.e. EU staff pays their income taxes directly to the EU), contributions from non-EU countries (like Norway and Switzerland closely affiliated with the EU) to certain programs such as R&D, and other items like the fines companies pay to the EU for breaching competition policy rules.[1]

The recent Franco-German proposal to raise €500 billion in common EU debt to help Europe’s economic recovery has provided the European Commission with a new opportunity to propose sources of traditional own resources ostensibly for eventually repaying the new pandemic debts incurred. The political advantage now of such new traditional own resources is that they would greatly reduce the additional required financial contributions from member states to repay the debt, currently proposed to begin in 2028. By proposing to issue the new common EU debt almost immediately, but only start repayments in 2028, the Commission further creates a “default position” in 2028: Unless member states have agreed to new sources of direct EU revenues by then, they will face either higher national financial contributions to the EU budget plus debt repayments or will have to stomach politically painful cuts in other parts of the EU budget to repay the debt. Considering, too, how new sources of direct EU budget revenues, even if earmarked for debt repayment over 30 years, are likely to prove permanent in nature, it is clear that the long-term strength and very nature of the EU governance is at stake in the current EU budget process.

Enter the US history books and the enactment of the 16th Amendment to the US Constitution in 1913, which enabled progressive personal income taxation to be levied at the federal government level for the first time.[2] The tax, which had previously been enacted and declared unconstitutional in the 1890s, enabled the federal government to finance its participation in world wars and the New Deal, establishing the modern federal government era in the United States. Prior to 1913 (apart from a brief period during and after the Civil War), the most important sources of US federal government revenues were not income or consumption taxes, but high tariffs on imports; “sin taxes” on spirits, tobacco, and wine; and a modest tax on corporations in the early 20th century.

The European Commission has proposed a new set of own resources similar to the revenue sources the US federal government had prior to 1913. It suggests raising an additional €10 billion from expanding the carbon emissions trading system (i.e. a 21st century climate “sin tax”), €5 billion to €14 billion from a new EU carbon border adjustment mechanism (i.e. a 21st century trade tariff), €10 billion from a new EU level corporate tax on multinational corporations operating across the EU internal market, and €1.3 billion in new revenue from a digital tax on large firms operating in Europe. These levies would, combined with the €20 billion already collected in traditional tariffs, increase European-wide resources to just over €50 billion,[3] or 0.4 percent of EU27 gross national income. Figure 1 compares the breakdown of these new EU traditional own resources with the financing of the pre-1913 US federal budget. 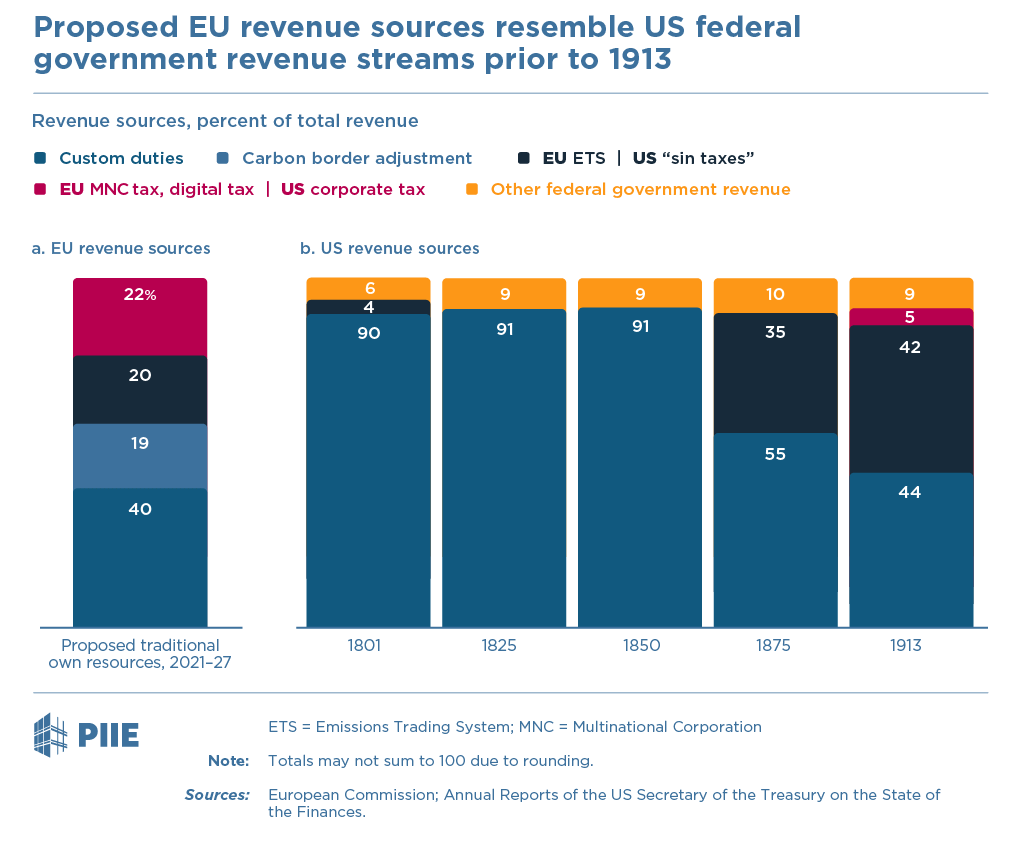 Europe is thus following the example of the early US federal government prior to the 16th Amendment in raising its direct revenue from limited tax sources. Until that changes, member states will remain fiscally dominant in Europe, and the EU will not take over any additional redistributive tasks.

1. The European Commission several years ago proposed some new sources of traditional own resources in the form of 20 percent of the revenue generation from the EU carbon Emissions Trading System (ETS), a new special consolidated corporate tax and a new levy on nonrecycled plastic.

2. See Lessons for EU Integration from US History (Kirkegaard and Posen 2018) for a detailed discussion.

3. Assuming that €9.5 billion—the mid-point of €5 billion and €14 billion—is collected from the new carbon border adjustment mechanism.

4. US federal government sin taxes began as an effort to finance the Civil War effort but were never rescinded.

Memo to the Biden administration on supporting recovery through automatic fiscal stabilizers, corporate taxes, infrastructure, and the social safety net

Government-guaranteed bank lending in Europe: Beyond the headline numbers