Six years ago, all of China’s regions were still growing at a real rate of 10 percent or more. Taking into account population growth to capture improvements in productivity, 26 out of China’s 31 regions expanded by at least 10 percent (in real per capita terms) at the time.

In 2012, the number of exceptionally fast-growing regions decreased to 23, meaning three-quarters of China’s regions were still performing exceptionally well. By 2014, however, only five regions boasted double-digit growth. Despite a gradual moderation of nationwide growth, the favorable news is that Chinese regions are converging. The chart below shows those regions that had relatively low per capita GDP in 2009 have grown significantly faster in the subsequent years than the more developed (mostly coastal) provinces. 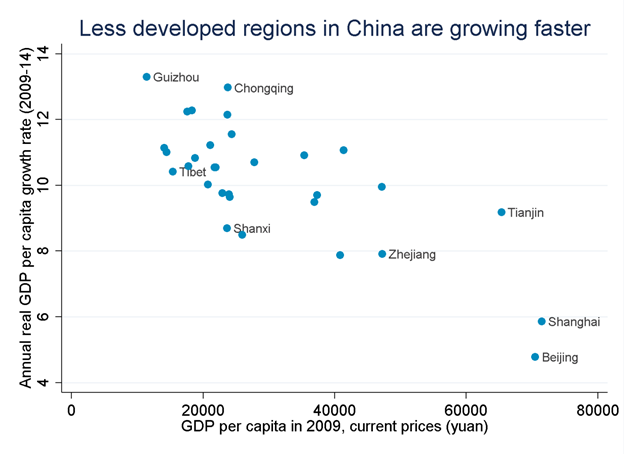 The “catch-up process” looks set to continue, but the gradual slowdown of the national economy over the preceding quarters masks some profound regional differences. Liaoning was in recession early this year, and Shenyang—the provincial capital city—saw a sudden rise in unemployment. Even prior to the recent growth deceleration, economic growth was slowing in several provinces, with the sharpest declines in growth between 2013 and 2014 (according to the latest available regional data) occurring in Yunnan, Liaoning, and Shanxi provinces (Shanxi is coal-dependent, and Liaoning borders North Korea).