This is the second in a series on China’s currency, the renminbi.

In the US presidential campaigns, both Donald Trump and Bernie Sanders have accused China of currency manipulation and called for penalties in the form of countervailing duties or fees. However, their accusations are out of date. By my calculations, the renminbi has not been undervalued since late 2014, and its undervaluation has not exceeded 5 percent since late 2011. The International Monetary Fund estimates that it has not been undervalued since early 2015. Hillary Clinton is closer to the mark when she uses the past tense to describe Chinese currency manipulation as something that should not be tolerated.

In its World Economic Outlook of October 2015, the International Monetary Fund projected China’s medium-term external current account balance (on trade and income) at a surplus of less than 1 percent of GDP. On this basis, I once again estimated in my most recent calculations of Fundamental Equilibrium Exchange Rates (here) that China’s currency, the renminbi (RMB), is neither undervalued nor overvalued. (I consider a currency to be undervalued if the country has a current account surplus of more than 3 percent of GDP, and overvalued if it has a deficit of more than 3 percent of GDP). From October to February China’s trade-weighted real effective exchange rate (REER), which measures the strength of the RMB against currencies of all other countries, rose by 3.9 percent, even though its bilateral rate against the US dollar fell by 3 percent. So China’s currency is still neither under- nor over-valued.

My calculations also indicated, however, that the US dollar has become substantially overvalued, and that the medium-term US current account is headed to a deficit of almost 5 percent of GDP. Accordingly, there was a need for the dollar to fall by about 10 percent. Instead, the real effective exchange rate of the dollar has risen by another 8 percent from October to February. As of the October estimates, if (but only if) all currencies appreciated against the dollar by the then-needed 10 percent, the right level for the Chinese currency would have been 5.74 RMB per dollar (compared to 6.35 in October). New estimates would show an even larger needed decline in the dollar against all currencies including the renminbi.

In 2006-07 when China was running a current account surplus of 10 percent of GDP, and was intervening in the exchange market to prevent a more rapid rise in the currency and hence adding to already huge foreign exchange reserves, the “currency manipulation” diagnosis would have been appropriate. However, as shown in figure 1, in recent years China’s current account surplus has been far smaller (and it is projected by the IMF to remain relatively small through 2020, as shown). A major reason is that since 2006, China’s real effective exchange rate has risen by about 50 percent (figure 1), curbing the competitiveness of Chinese goods from levels they otherwise would have reached. 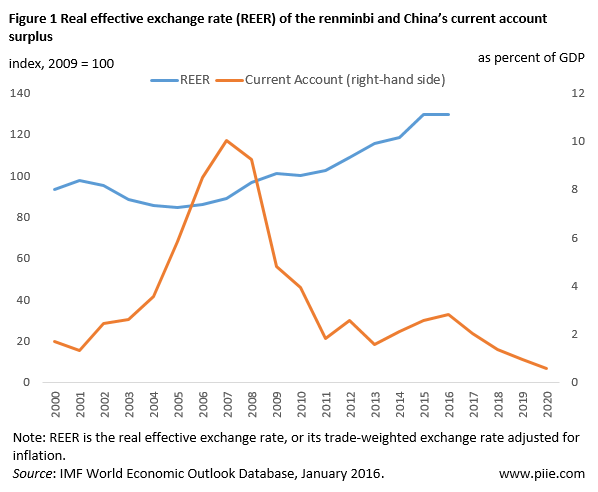 Moreover, as most currency analysts are acutely aware, for the past year there has been a large decline in China’s reserves, from a peak of about $4 trillion to about $3.2 trillion (figure 2). China has been intervening in the foreign exchange market but in the opposite direction from that before: selling dollars in an attempt to keep the renminbi from falling further, rather than buying dollars to keep the it from rising. The need to prop up rather than hold down the renminbi reflects a shift toward large capital outflows (figure 2). These appear to be mainly driven by the changed outlook for the renminbi, from what was previously a one-way bet on appreciation to what has been a risk of depreciation against the dollar. Chinese firms are finding it less attractive to borrow dollars and more attractive to borrow renminbi, given the new risk that repayment in dollars will be more expensive rather than less.

In August, as part of its effort to have the RMB included in the IMF’s Special Drawing Rights basket of major currencies, China moved toward greater market orientation in its daily fixing practices. After an initial decline of the RMB by about 2-3 percent against the US dollar, international fears of a new phase of competitive devaluation by China temporarily triggered turmoil in financial markets. As it has turned out, however, China has not launched a beggar-thy-neighbor currency war. Indeed, from July 2015 to February China’s real effective exchange rate rose by 2.9 percent, even though the RMB fell by 5.2 percent against the surging US dollar. 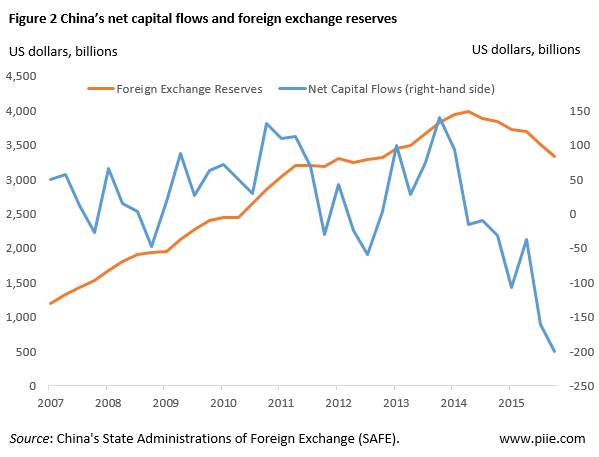 The US dollar is overvalued mainly because of the new phase of a return to more normal monetary policy and higher interest rates in the United States even as Europe and Japan are moving toward additional monetary easing. The dollar has also risen against commodity-dependent currencies as prices for oil and other commodities have fallen sharply. In short, it would be a serious mistake to blame the strong dollar on currency manipulation by China.

To what extent are tariffs offset by exchange rates?