North Korea’s relationship with Southeast Asian countries has gotten more press recently, thanks largely in part to the assassination of Kim Jong-nam in Malaysia in February and the Trump administration’s claim that the reason Trump invited Filipino strongman President Duterte to the White House was due to the necessity to better coordinate policy on North Korea. Today, I look at how Southeast Asia’s collective insouciance has helped Pyongyang fly mostly under the radar, fill its coffers, and keep its criminal enterprises afloat.

Last week, we noted the constraints that Singapore faces in enforcing sanctions, not because of corrupt politicians or underdeveloped institutions, but because domestic legislation has not kept pace with UN Security Council resolutions. Also last week, Sheena Chestnut Greitens wrote an excellent piece for the Monkey Cage on DPRK-Philippines relations, noting the decades long history of North Korean illicit networks operating in the Philippines. The Philippines has been a hub for the North Korean drug trade, was the site of last year’s interdiction of vessels flying under flags of convenience in violation of UNSCR 2270, and was front and center in last year’s cyber bank heist where North Koreans allegedly stole $81 million from the Bangladeshi Central Bank. The world should be concerned about these non-proliferation and otherwise criminal behaviors as they relate to the Philippines-DPRK relationship, although in Trump’s call with Duterte last month these specific issues weren’t discussed.

But is the overall ASEAN-DPRK trade picture part of the problem too? As we noted in March when looking at DPRK-Malaysia trade, licit trade is not the main story. Indeed, DPRK-ASEAN trade is relatively small pickings, but $181 million per year is not nothing. More, in the Philippines case there is actually a trend upward, and as Greitens noted, the Philippines is North Korea’s third largest trading partner after China and India—even eclipsing Russia. But beyond simply looking at the overall trade figures, the trade deficit that North Korea is running every year with ASEAN countries is noteworthy (second graph below). That North Korea can regularly fund such large trade deficits suggests greater inflows into North Korea than show up in the trade data. Although it is unclear exactly how North Korea can sustain these deficits, it is clear that illicit trade is a crucial part of the equation and an area where ASEAN countries are a hub. 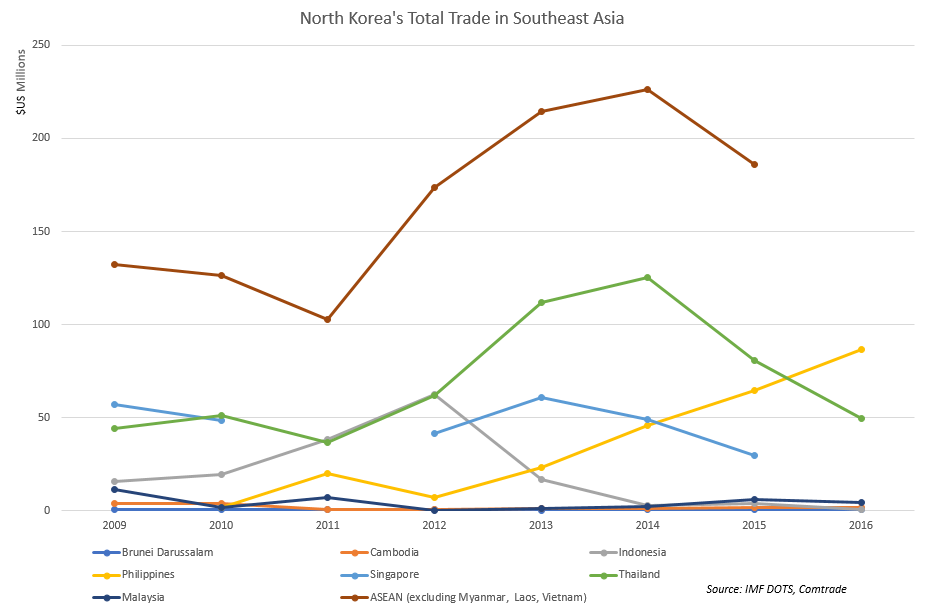 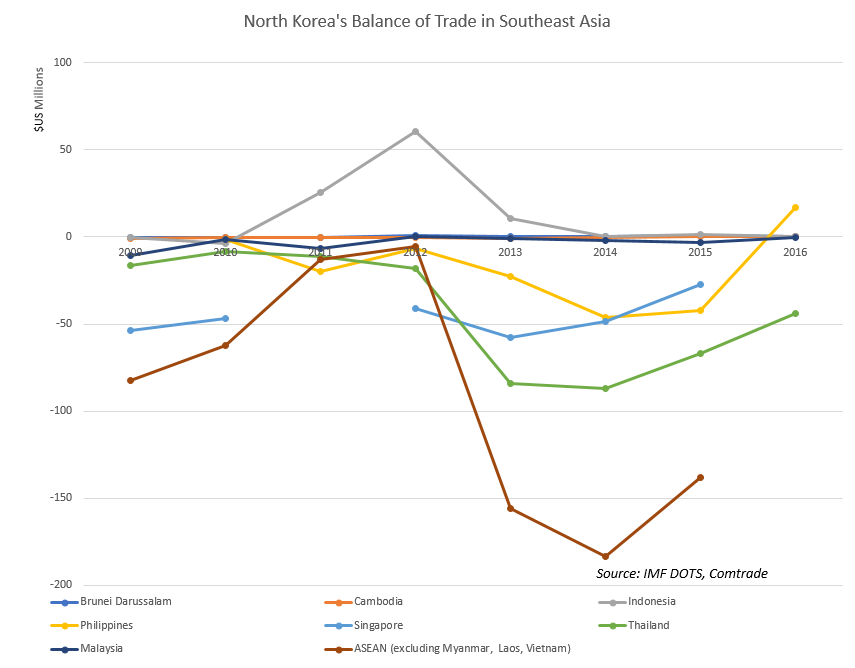 We mentioned in March all the countries that waive visa requirements for DPRK nationals, a baseline proxy for countries that facilitate North Korean illicit networks; two ASEAN countries—Cambodia and Laos—make the list, although Singapore and Malaysia ended their programs only in the last year. There are also a few other non-ASEAN Southeast Asian (and close to Southeast Asia) countries and territories on the list worth mention: Bangladesh, Macao, Nepal, Sri-Lanka, and Timor-Leste.

Another metric for understanding North Korea’s engagement with the world is simply looking at which countries permit DPRK embassies on their soil. Worldwide, North Korea has about twice as many embassies abroad as partner countries have embassies in Pyongyang and there’s a reason why. It has long been known that North Korea runs its networks of nefarious actors and entities out of its embassies abroad, which UNSCR 2321 attempted to curtail. In fact, earlier this month, at a meeting with ASEAN foreign ministers, Secretary Tillerson encouraged ASEAN countries to do more to cut funding streams to North Korea. He earlier called on all countries to suspend or downgrade diplomatic ties with Pyongyang due to concerns that these ties contribute to North Korea’s arms programs. He even warned that the US could implement secondary sanctions against firms and people conducting business with North Korea. This warning should be taken to heart as ASEAN countries all have varying degrees of exposure to US markets and investment, and frankly, the US has less to lose by letting loose with secondary sanctions in Southeast Asia than it does in China.

But, it does not appear that ASEAN countries are ready to turn the screws on Pyongyang, at least not yet. North Korea maintains embassies in all ASEAN countries except for the Philippines and Brunei. North Korean agents are almost surely taking part in some variety of nefarious non-diplomatic actions in all of them. The Kim Jong-nam fallout—or lack thereof—in Malaysia is striking. If North Korea can murder someone with a WMD in another country’s international airport, hold that country’s diplomats hostage in Pyongyang until the murder suspects are permitted safe return to North Korea, and that doesn’t warrant severing diplomatic ties, then really what would it take? Maybe North Korea really can get away with murder.