Sanctions News Galore: Part I, the Panel of Experts Report on China

Imagine dealing with an adversary which does not feel itself bound in any way by international legal norms, and indeed believes that such norms are only shackles that threaten its very existence. The result? What Justin Hastings calls “A Most Enterprising Country” in his terrific new book on North Korea and the world economy from Cornell University Press. North Korea does not do sanctions evasion on the side; it is a central focus of the regime’s entire foreign economic policy. But the evidence is now piling up on what North Korea is managing to do and how it is doing it. As it does, there are fewer and fewer reasons to shun secondary sanctions, and there is some solid reporting that the Trump administration is focused on the issue (Jay Solomon at the WSJ, behind a paywall).

The evidence is accumulating on how North Korea uses Chinese brokers to evade sanctions, including multilateral sanctions to which China has agreed.

The UN Panel of Expert reports were always useful, but are getting better and better at tracking down particular entities, including continually-morphing North Korean shell companies and their suppliers and customers. (The most recent report can be found here; the Panel’s website and links to earlier reports here). The reports find evidence of prohibited transactions with a variety of countries, from a number in Africa, to Sri Lanka, to European parts and components that found their way east to Austrian equipment installed at Masik Pass. But because so much ultimately passes through China, it is useful to note just some of the Chinese cases, as each has a lesson for how the broader sanctions-evasion business works:

Military radios destined for Eritrea were shipped to the country from China by Beijing Chengxing Trading Co. Ltd.; this case provides a link to Glocom we noted in a recent post on Malaysia and the deeper network of companies tied to the Reconnaisance General Bureau that have been operating in Southeast Asia, including in Singapore. Spare Scud parts were also shipped to Egypt and other military hardware elsewhere in Africa through intermediaries in China. 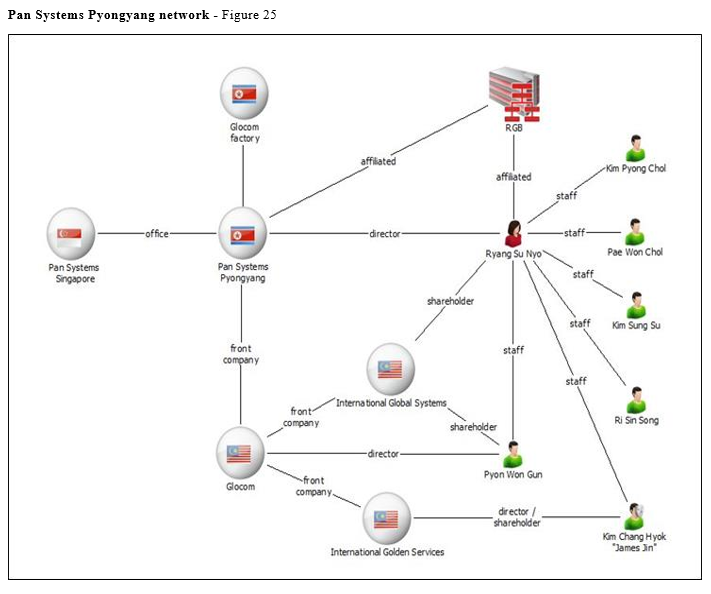 Had enough yet? Thankfully, that about covers the main clusters of activity, with the Panel concluding by quite sensibly calling on entities to be designated and member states to exercise due diligence over this kind of activity, particularly when carried out by embassy personnel. Marc and I have always argued that sanctions are not self-enforcing. You want to know the agenda for the US going forward on sanctions? This is a pretty good place to start.

Haggard on Sanctions at the Monkey Cage