Today, July 31, 2012, Venezuela officially becomes a full member of the Mercosur customs union. But Venezuela's accession—nearly a decade in the making—effectively puts to rest the pretense of Mercosur as a serious economic integration arrangement.

Mercosur, the acronym for the Common Market of the Southern Cone, started promisingly enough, a political triumph of cooperation over conflict with former nuclear arms competitors Brazil and Argentina pledging instead to work towards a common economic future. But in recent years, Mercosur has gone through backsliding and missed out on opportunities seized by other Latin American countries engaging in trade deals with Asia and other parts of the world. Adding oil-rich Venezuela, with its disdain for trade liberalizing initiatives, would likely not contribute to a further easing of trade restrictions. In addition, membership by Venezuela—led by the increasingly autocratic and eccentric Hugo Chavez—would make a mockery of the compact's stated commitment to democracy.

The Treaty of Asunción, signed on March 26, 1991, created a free market among Argentina, Brazil, Paraguay, and Uruguay and bound them together with a four-tiered common external tariff, common trade rules and regulations, and the objective of macroeconomic policy coordination. Mercosur was seen at the time as a shining emblem of Latin America's "new regionalism"—a new type of Latin American economic integration arrangement that, unlike its predecessors in the 1960s and 1970s (think: the Andean Pact, the Latin America Free Trade Association, or LAFTA, or the Central America Common Market, or CACM) was aimed towards liberalization, competitiveness, and global integration.

Mercosur has had its detractors. The World Bank famously published a paper whose title implied that Mercosur would bring down world welfare as a result of its potential for trade diversion.1 But many studies predicted welfare gains for Mercosur members from further integration and liberalization.2 Mercosur is also largely credited with bringing Venezuela back from the brink of dictatorship. In 1996, in a meeting at San Luis, Argentina, Mercosur added a so-called democratic clause, requiring democratic institutions for membership. In the period 1990–1999, intra-regional exports grew by an average annual rate of 24.5 percent, compared to exports to the rest of the world, which grew by 8.7 percent. In the 2000s, intraregional exports grew by 6.3 percent, compared to growth for the rest of the world of nearly 10 percent.

Intra-regional trade in Mercosur took off in the early days, initially comprising 5 percent of the region's exports in 1990. Intraregional flows reached a high of 25 percent of trade flows by 1998. Intraregional trade has ebbed and flowed, however, largely with the fortunes of the Mercosur member economies, falling to a low of 11 percent of total exports in 2001 and leveling off at 15 percent in the last few years, displaced by dynamic exports to East Asia. As seen in the figure below, after initial success, Mercosur has stagnated. 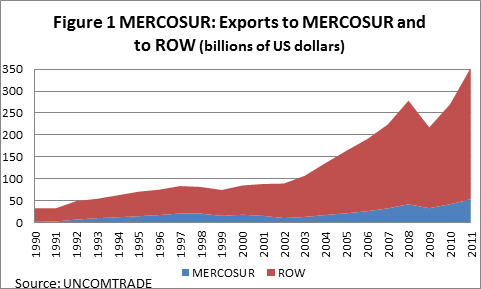 ROW = rest of the world

Mercosur has weathered many crises: the 1996 Paraguay coup attempt; Brazil's 1999 devaluation; Argentina's 2002 currency crisis; and the 2008–2009 world economic slowdown. The customs union has periodically been dogged by economic tensions between the members that have caused key players Argentina and Brazil to bend Mercosur's rules to the extent that analysts have often predicted their break3.

From Argentina's 3 percent statistical tax applied to imports (including from other Mercosur countries) in the 1990s, to recent non-automatic import licenses from Brazil and Argentina, Mercosur members have applied protectionist measures against each other—measures that go against the law and spirit of customs unions. While Mercosur's flexibility may have allowed the union to survive several crises, it can also be seen as having eroded the integrity of the endeavor. According to the latest report from Global Trade Alert (GTA), which tracks trade protectionist measures, of Argentina's 142 red measures (measures that "certainly discriminate") implemented since 2009, 72 targeted Brazil, at least 3 exclusively. Of Brazil's 49 red measures, 5 affected Argentina (one targeted only Argentina and Uruguay). Uruguay, notably, levied no measures against Argentina or Brazil.

Mercosur's trajectory over the past few years has increasingly differentiated it from the trade policies of several other Latin American countries, particularly those participating in the Alianza del Pacífico (Pacific Alliance) and the Central American countries. The Pacific Alliance is an agreement among Chile, Colombia, Peru, and Mexico to deepen integration in order to forge trade ties in the Asian region, supplemented by competitiveness and infrastructure strengthening measures. While the Pacific oriented countries have negotiated free trade agreements with partners ranging from the United States to the European Union to Japan and China, Mercosur remains mired in a decade-long negotiation with the European Union and a handful of "framework" trade agreements. While the combined GDP of the Pacific Alliance is slightly less than two-thirds that of Mercosur, exports are more than one-third higher.

In fact, rather than enhance their portfolio of trade agreements, Mercosur has pursued the opposite strategy, with Brazil renegotiating and Argentina pulling out of ACE 55, their automotive trade agreement with Mexico, following trade deficits with Mexico in that sector. It is notable that Argentina nationalized Repsol's share of Argentine oil company Yacimientos Petrolíferos Fiscales (YPF) in the wake of an energy trade deficit.

Venezuela's membership in Mercosur signals more of the same. In strategic terms, this union links the region's largest oil producer (Venezuela reportedly holds world's largest oil reserves) and two main agricultural producers. This alliance could serve to integrate markets in the north of South America, a region that is still relatively undeveloped.

It does not, however, bode well for further trade liberalization, transparency, or the rule of law. Venezuela slipped into full membership after Mercosur leaders, at the June 29 Mercosur Summit, temporarily suspended Paraguay, in response to what they called an "institutional coup." This suspension was convenient for Venezuela, as Paraguay's Congress had to date refused to ratify Venezuela's membership, which has been pending since Venezuela applied for membership in December 2005. Decisions in Mercosur are taken by consensus, and with lone holdout Paraguay removed from membership, Venezuela was in. On July 31, Venezuela will sign a Protocol of Accession to Mercosur and will have four years to adopt the common external tariff (CET) as well as all the Treaties, Resolutions, and Decisions that make up the Mercosur framework. Venezuela will immediately have a full vote in the consensus-based regime.

In the next four years, Venezuela will need to adjust its tariff schedule to the Mercosur CET. According to World Trade Organization (WTO) statistics, currently Venezuela's protection of agriculture (15 percent average most-favored nation, or MFN, tariff; 16.6 percent trade-weighted) is greater than that of Mercosur (Brazil's average MFN tariff is 10.3 and trade-weighted is 11.0 percent). On non-agricultural commodities, Venezuela's trade-weighted tariff of 11.4 percent is higher than Brazil's 9.9 percent and lower than Argentina's 12.3 percent. Venezuela currently has a trade deficit with all Mercosur partners.

Venezuelan President Hugo Chavez has established a commission "responsible for assessing the strategic aspects of the national economy and the markets that will be open for Venezuela in the large South American region, under the principles of respect for asymmetries and technological gaps and complementariness of productive chains." This could signal a commitment to using Mercosur as a vehicle for addressing some of Venezuela's competitiveness deficits—or a desire to revert back to the types of production sharing arrangements see in the Latin American trade agreements of the protectionist trade policies seen during Latin America's import substation industrialization (ISI) period in the 1960s and 70s. Of certain interest to Venezuela is Mercosur's Program for the Integration of Production, created by Common Market Council Decision of December 2008. Its aim is to strengthen the complementary production of companies in Mercosur countries and provide support to small and medium enterprises that have not benefitted from the compact's market opening opportunities.

While Mercosur members have publicly welcomed Venezuela, some in the region have expressed concern about its full membership. One concern relates to the integrity of the democratic charter. President Chavez has clamped down on opposition politicians and limited the media. Venezuela ranks 96th on the Economist's 2010 democracy index and is characterized as a hybrid regime (Uruguay, the 21st, is a full democracy; and Brazil ranks 47th, Argentina is 51st, and Paraguay is 62nd in the category "flawed democracies").

Another concern is Venezuela's trade policy. Venezuela exited the Andean Community customs union in protest against its partners' negotiations towards a free trade agreement with the United States and set up a barter arrangement, the Bolivarian Alliance for the Americas (ALBA), to be an alternative to the then ongoing Free Trade Area of the Americas negotiations. 4 Venezuela has also been less than responsive to international trade and investment institutions: Last week Venezuela completed its withdrawal from the International Center for Settlement of Investment Disputes (ICSID), the international forum for investor-state arbitration disputes. (The ICSID is referenced in Venezuela's bilateral investment treaties, or BITs, with Mercosur members, among others.)

Jose Botafogo Goncalves, a Brazilian architect of Mercosur, expressed his misgivings to Brazilian newspaper O Globo: "Venezuela doesn't meet the basic requirements to enter Mercosur," he said."Venezuela's problem is Chavez, who doesn't like free trade and wants to transform the bloc into a political platform."

Mercosur has long been heading in that direction anyway, but Venezuela's entry may seal that deal. Former President Fernando Henrique Cardoso is famously quoted as saying, in the context of the Free Trade Area of the Americas (FTAA) negotiations, that "Mercosur is our destiny."5 Venezuela's addition to Mercosur seems to indicate that this destiny will continue to be an inward-looking one.

4. In addition to Venezuela, ALBA members include Antigua and Barbuda, Bolivia, Cuba, Dominica, Ecuador, Nicaragua, Saint Vincent, and the Grenadines.

5. The FTAA was a free trade negotiation whose objective was to bring together thirty-four countries in the Americas into a free trade zone stretching from "the Yukon to Patagonia." It was originally proposed at the first Summit of the Americas in December 1994. Negotiations were launched in 1998 and lasted until 2003, when countries were unable to agree on how to proceed and the process broke down.

Three Ways Latin America Can Turn a Crisis into a Positive

Speeding the Winds of Change in Cuba-US Economic Relations