President Donald Trump harnessed his successful 2016 presidential campaign to the issue of lost manufacturing jobs and the “evils” of trade deficits. The Republican national convention in August 2020 demonstrated his determination to do so again. Trump blames trade and offshoring of manufacturing jobs overseas. Democratic presidential nominee former vice president Joe Biden is also making the recovery of manufacturing jobs central to his campaign. Both Trump and Biden propose new programs to enhance US industrial production and technologies. But the problem is that some of their proposals may be less effective in creating additional manufacturing jobs than they assume.

Concerns about the loss of manufacturing jobs are understandable, especially since both candidates are going after middle class voters in the so-called Rust Belt states—voters who helped Trump win four years ago. In 1970, for example, men who had not graduated from college held 35 percent of the jobs in manufacturing. But over the past five decades the share of US employment in manufacturing has declined steadily, dropping precipitously from 17.3 million jobs in 2000 to 11.5 million jobs in 2010. Since 2010, despite almost a decade of recovery and Trump’s focus on reducing US manufacturing trade deficits, only a fifth of the lost manufacturing jobs had been replaced, and that was before the job losses caused by the COVID-19 shock.

To compete with foreign manufacturers, Trump and Biden seem to agree that policies are needed to enhance US international competitiveness and increase the US trade balance in manufactured products. But policies that improve technological capabilities present a dilemma that their advocates usually ignore: Faster growth in manufacturing productivity, which better technologies bring about, does not necessarily lead to more jobs. Improved productivity generally implies that goods can be manufactured more cheaply using fewer workers, so unless there is high enough demand at home and abroad for the lower-priced or new products that productivity growth generates, the impact on jobs could be substantially smaller than might be expected. 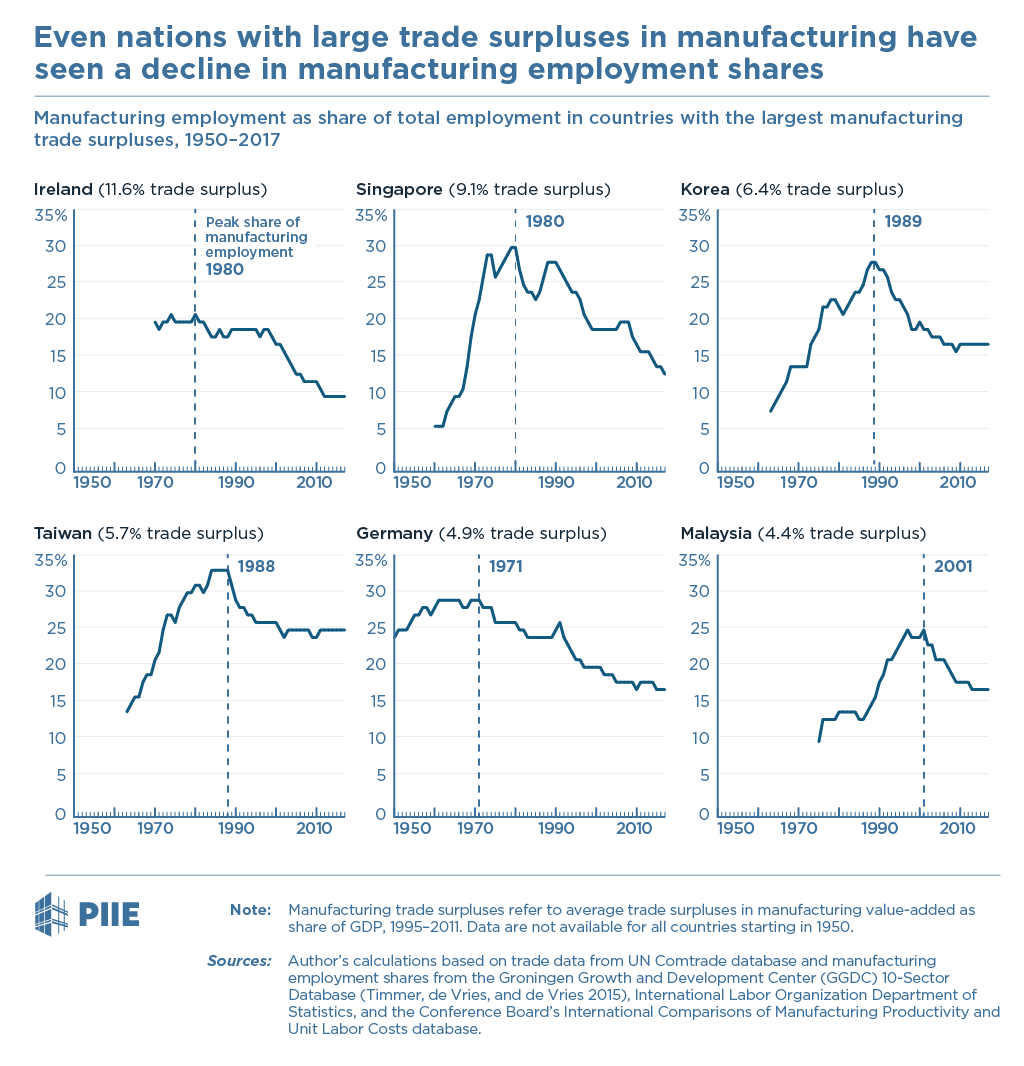 This finding suggests that whatever their other merits, policies that emphasize improving high-tech manufacturing competitiveness may not actually boost manufacturing employment all that much. Moreover, these policies are also likely to disproportionately increase the demand for highly skilled and educated workers and could therefore exacerbate income inequality stemming from higher wages paid to college-educated workers for their skills.

In addition to industrial policies aimed at enhancing technology and competitiveness, both Trump and to some extent Biden advocate for bringing global supply chains back to the United States by raising trade barriers and using government procurement spending to buy locally produced products. This approach could boost manufacturing employment in favored industries. But it will also raise costs for other industries dependent on such supply chains, so exports could be penalized and overall job gains may again be less than expected.

Trade surplus or deficit? Neither matters for changes in manufacturing employment shares

Trade surplus or deficit? Neither matters for changes in manufacturing employment shares