A fresh round of tit-for-tat import tariff proposals by the United States and China in early April further escalated the trade conflict between the two major economies. Yet the extent of the potential concern is unknown, as each proposal included the bare minimum about the products that would be affected. This blog post matches the tariff lists to trade statistics in order to report on the products, sectors, and total trade that would be hit by the proposed new tariffs.

Beijing’s proposed tariffs would cover products in which US exports to China were worth an estimated $49.8 billion in 2017. The top sectors include transportation equipment (aircraft and autos) and vegetables (soybeans).

US imports from China subject to Trump’s 25 percent tariffs

In August 2017, the Trump administration initiated an investigation into Chinese unfair trade practices under Section 301 of the Trade Act of 1974. On March 22, 2018, the US Trade Representative issued the report of the investigation, and President Trump announced “with China, we’re going to be doing a Section 301 trade action. It could be about $60 billion but that’s really just a fraction of what we’re talking about.”

On April 3, the Trump administration finally released the list of products under consideration for the proposed 25 percent tariffs.

I matched the product codes to 2017 US import data from China at the product level. The data are available here. [xlsx]

Trump’s proposed 25 percent tariffs would cover an estimated $46.2 billion of US imports from China in 2017—somewhat less than the $60 billion he had suggested on March 22.

Figure 1 illustrates the top sectors hit by Trump’s tariffs. The standout is machinery, mechanical appliances, and electrical equipment at $34.2 billion. The tariffs would also impact miscellaneous manufactured products ($6.8 billion) and transportation equipment ($2.7 billion). Interestingly, the tariffs would also be applied to $1.7 billion of metal products, including a number of the same steel and aluminum imports that have already been subject to Trump administration tariffs under Section 232 of the Trade Expansion Act of 1962 that went into effect on March 23. 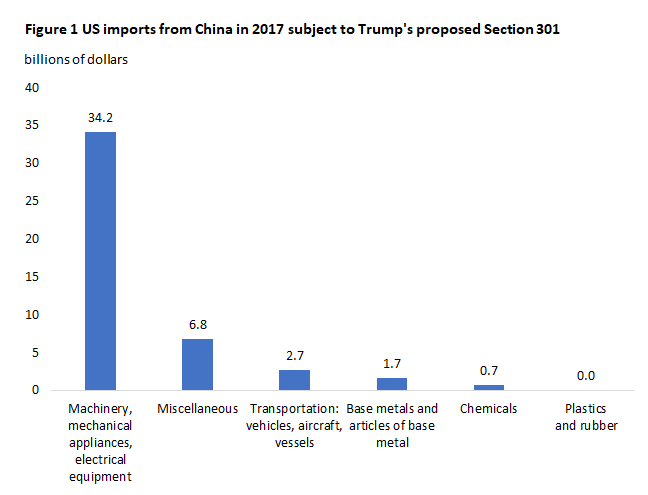 Of the 1,333 products on the proposed retaliation list, the largest imports (as defined at the 8-digit level) include varieties of televisions ($3.9 billion), automobiles ($1.5 billion), printing machine parts/accessories ($1.4 billion) and aluminum ($1.1 billion). The full product-by-product list is also available here. [xlsx]

US exports to China subject to Beijing’s 25 percent tariffs

On April 4 2018, the Chinese government announced a list of products over which it proposes to impose tariffs in response to the Trump administration’s announced Section 301 tariffs.

Because Chinese import data are not publicly available, I matched Beijing’s published product codes to 2017 US export data to China. However, this required the data to be matched at a higher level of aggregation than what China had published.[1]

The data are available here. [xlsx]

Beijing’s proposed 25 percent tariffs would cover an estimated $49.8 billion of US exports to China in 2017.

Figure 2 illustrates the top sectors hit by China’s retaliatory tariffs. The two standout US export sectors to be hit by China’s tariffs are transportation (vehicles, aircraft, and vessels, $27.6 billion);[2] and vegetable products ($13.7 billion). Other sectors that would be hit include plastics and rubber ($3.5 billion), chemicals ($2.1 billion), and mineral fuels ($1.7 billion). 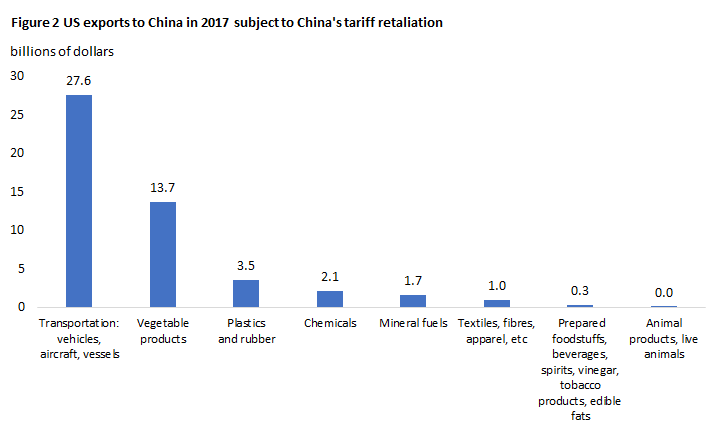 1. Publicly available US export data only concords to Chinese import product codes at the 6-digit level of the Harmonized System. This approach therefore reduces the 106 8-digit Harmonized System products published by China to 83 6-digit products.

The data underlying this analysis are available: US imports from China [xlsx] and US exports to China [xlsx]

Effectively as 25% sales tax for US consumers.  For the other side a means to wean itself off US technology completely and be unfettered.  A smart cookie would have focused on industrial automation within the US.

Will a US-China Trade Deal Remove or Just Restructure the Massive 2018 Tariffs?