President Trump’s protectionism has a distinctive focus on disrupting US access to global supply chains. This column reveals that the major economies had in fact begun to impose additional trade protection on intermediate inputs even prior to 2016. New barriers targeting cross-border supply chains simply arose through policies aside from headline tariffs. Some of this new protection has also already spread beyond China’s trade and begun to cover exports from other countries. These results, combined with more recent policy actions, widen the possibility of a negative protectionist impact on the global sourcing of parts and components.

The scale of President Donald Trump’s protectionism is itself striking: His new tariffs in 2018 alone cover roughly 12 percent of US imports. But a second distinguishing feature is the protection’s distinctive focus on disrupting US access to global supply chains (Krugman 2018, Baldwin 2018). Trump’s tariffs on $250 billion of US imports from China have disproportionately targeted intermediate inputs. His trade restrictions on nearly $50 billion of imports of steel and aluminum will ultimately raise costs for US-based companies that rely on these metals, an especially poignant point for aluminum, where 97 percent of US jobs are in consuming industries.[1]

Trump’s approach runs counter to the strategy that governments have adopted almost globally in recent decades: keep tariffs on inputs low. This facilitates domestic access to foreign-produced components and contributes to the competitiveness of local industry. Indeed, supply chains expanded across borders considerably during this period when countries erected low barriers on imported intermediates and took on legal commitments to keep them low via international trade and investment agreements (Johnson and Noguera 2017, Osnago et al. forthcoming).

But in Bown (2018b) I present new evidence that suggests that this is not the entire story. Hidden behind unchanging tariff policies, governments had begun to use other types of restrictions to curtail trade in intermediate inputs. It was taking place even before Donald Trump and not only in the United States.

Over recent decades, governments have typically applied lower tariffs to imports of capital equipment and intermediate inputs than to imports of final goods. For the period since 1995, figure 1 documents this for the Group of 20 (G-20) economies’ average applied most-favored nation (MFN) tariffs.[2] These tariffs are the most important policy to begin such an analysis, since most of world trade takes place under WTO rules and is outside of the tariff preferences granted under free trade agreements.[3] 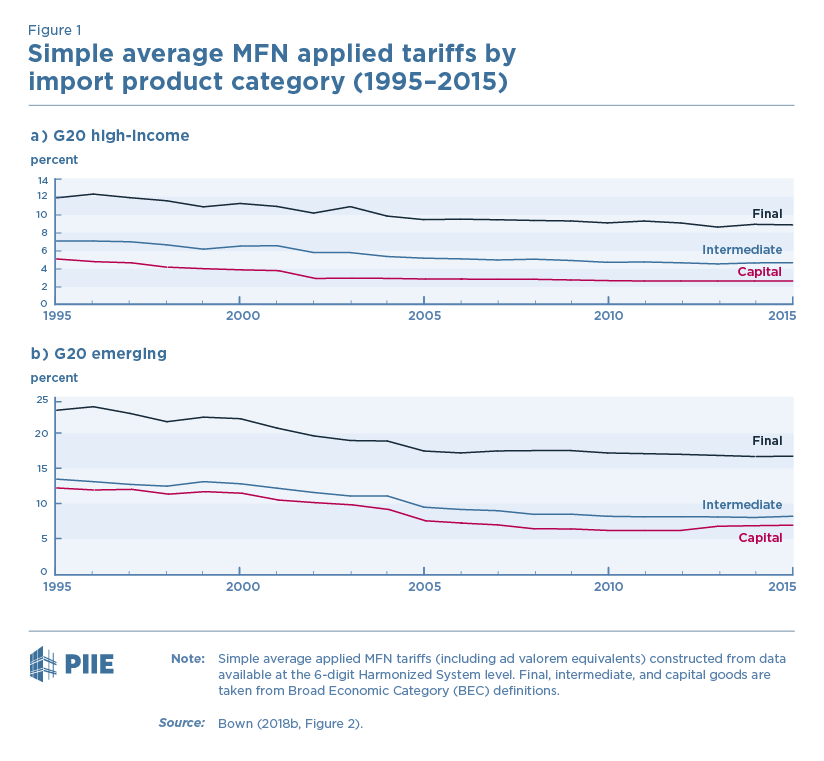 The rank ordering of tariffs across product categories is clear: On average, countries impose lower tariffs on capital equipment than on intermediates, which are much lower than those applied on imports of final goods, like consumer items. The evidence of figure 1 confirms earlier, cross-sectional research documenting the patterns of higher tariffs on final goods relative to intermediates arising even within industries (Bown and Crowley 2016). Finally, emerging economies also tend to apply higher tariffs than high-income economies across each category of products.

The main take-away for supply chains is that the seemingly ubiquitous ranking of higher applied MFN tariff protection for final goods relative to inputs did not budge in the lead-up to 2016.

While applied MFN tariff rates set an important baseline, major economies have increasingly turned to other trade policies when needing to make short-term product- and country-specific changes in protection. In the two decades prior to 2016, they commonly did so by imposing restrictions under the temporary trade barrier (TTB) policies of antidumping, countervailing (anti-subsidy) duties, or safeguards.[4]

And with respect to supply chains, a detailed examination of the TTB policies tells a far different story. Figure 2 illustrates the share of imports covered by the cumulative application of trade restrictions in place under these policies in each year over 1995–2016. Since governments frequently impose these restrictions as special duties set at prohibitively high levels, the figure relies on import coverage ratios to characterize levels of trade protection instead of average tariffs.[5] 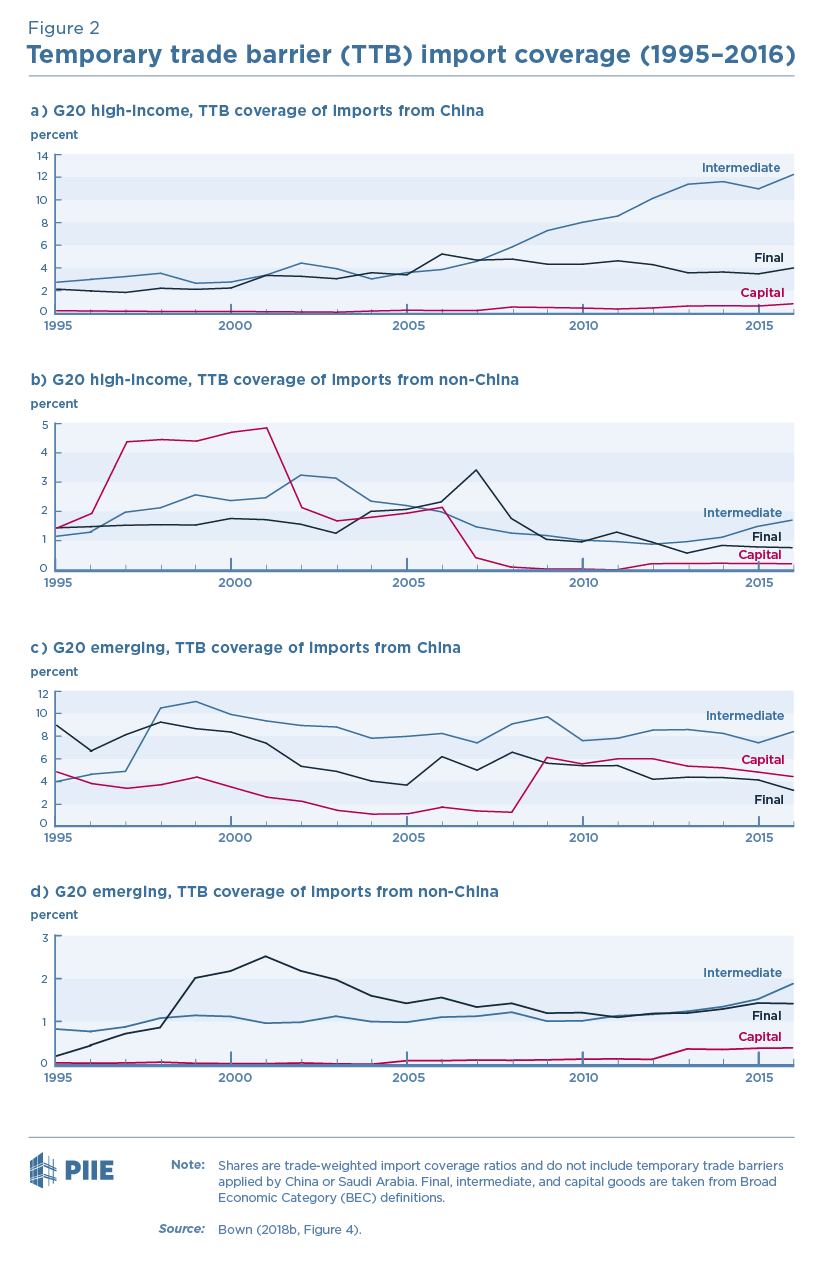 Three pieces of evidence stand out from figure 2.

In summary, trade restrictions increasingly targeted cross-border supply chains, and they were pushing beyond China’s exports to hit global trade in parts and components. This phenomenon was arising across policy-imposing countries and even before the election and protectionist policies of Donald Trump.

Other new barriers to supply chains and implications

The causes of such changes to trade protection are not yet well understood. One contributor is likely related to China’s continued expansion of capacity and exports in sectors like steel and aluminum. Despite China being long-targeted by TTBs (see again figure 2), its export expansion into third markets continued to lower world prices. The resulting trade diversion—e.g. the United States importing more steel from Korea or Europe instead—likely contributed to additional protection spreading to cover imports from such third countries.[6]

Yet, one important additional point is that the results illustrated by figure 2 are not limited to the metals sector. The share of imported intermediates covered by TTB protection was higher in 2016 relative to 2010 for a number of industries, including electronics, transportation equipment, wood products, and prepared foodstuffs.[7]

And of course, protection that may disrupt established supply chains has moved well beyond even these TTB policies of anti-dumping, anti-subsidy duties, and safeguards since 2016. Now notorious are the Trump administration’s special “national security” and “China unfair trade” tariffs that target inputs.[8] But consider even the administration’s push for modifications of the North American Free Trade Agreement. The automobile rules of origin requirements and labor value content provisions in the newly announced US-Mexico-Canada Agreement are also likely to curtail trade in intermediate inputs in the sector (Bown 2018d). Finally, outside the region, there is also the potential for the United Kingdom’s Brexit negotiations to result in new tariff and non-tariff barriers on pan-European trade in intermediate inputs (Vandenbussche et al. 2017).

The trade policy threat to cross-border supply chains is clearly on the rise. But somewhat surprisingly, many of its signs were apparent even before Trump.

Bown, Chad P., Eujin Jung, and Zhiyao Lu (2018), “Trump and China Formalize Tariffs on $260 Billion of Imports and Look Ahead to Next Phase”, PIIE Trade and Investment Policy Watch, September 20.

Osnago, Alberto, Nadia Rocha, and Michele Ruta (forthcoming), “Deep Agreements and Vertical FDI: The Devil is in the Details”, Canadian Journal of Economics.

3. Using 2007 data on preferential trade agreements, WTO (2011) estimated that 84 percent of world merchandise trade (not including intra-EU trade) was still taking place on an MFN basis.

4. For a general introduction to TTB policies, see Bown and Crowley (2016).

7. See Bown (2018b, figure 5). As another example, the US application of a global safeguard on solar panels in 2018 followed a series of country-specific antidumping restrictions imposed since 2011 that had led to trade diversion (Bown 2018e).

Trump's phase one trade deal with China and the US election