The sky fell on the US poultry industry last year. But NAFTA and the TPP helped protect US exports.

Migrating birds don’t pay much attention to border regulations, it turns out. But last year’s “bird flu” outbreak, a huge blow to parts of the US poultry industry, offers a clear example of why humans should take a closer look at the value of global trade agreements.

In 2015, the United States was battling its worst-ever outbreak of avian influenza. While the Centers for Disease Control reported no cases among humans, the Department of Agriculture put the price tag for taxpayers at $950 million for cleanup and payments to more than 200 affected commercial poultry farms.

The outbreak required the slaughter of 50 million chickens and turkeys. Annual US poultry exports fell by more than $1.5 billion after some trading partners banned all US poultry products.

Here’s how a global trade framework kept this situation from becoming far worse for the world’s largest poultry producer. Other major US partners trusted US regulators to stop the disease from entering their markets. With US poultry products still welcome in many countries, the prospects were not nearly as dim for US poultry farming operations and the thousands of jobs they provide.

Yes, the much-pilloried free trade agreements (FTAs) of the North American Free Trade Agrement (NAFTA) and even the Trans-Pacific Partnership (TPP) were an unlikely savior. While the multilateral World Trade Organization (WTO) agreement has provided the first step for encouraging countries to set trade policy based on sound scientific evidence, these newer FTAs push partners to engage in additional regulatory cooperation with the United States.

You can’t stop bird flu—you can only hope to contain it. Highly pathogenic avian influenza, or HPAI—the particularly devastating 2015 variant of the disease—appears to have been transmitted from wild waterfowl to commercial poultry.

The likely culprits were infected flocks of ducks or geese migrating home after spending the winter down south. On the trek north, the HPAI-infected flocks transmitted the disease to chickens and turkeys on farms in 15 states in the Pacific Northwest and Midwest in the first half of 2015.

Veterinarians from US government agencies, including Department of the Interior and the USDA, worked with farmers in Iowa, Minnesota, and other states to help contain the outbreak. Upon positive results of HPAI, they would cull infected flocks, dispose of carcasses and then decontaminate and clean entire farms. The last incident was reported in June 2015.

The USDA had to provide real-time public updates about what it was finding.

The United States and other geographically large countries have pushed for an additional important protocol on “regionalization.” If a country can make the scientific case that a particular disease outbreak has been contained to a geographic region and limited set of products, then partners’ trade bans should not target unaffected products from other regions of the country.

In a coincidence of timing, the United States just recently won a major WTO trade dispute relying on these OIE guidelines. India had failed to open its market to US poultry long before the 2015 HPAI outbreak. As legal scholar Jennifer Hillman and I have noted, one major US concern in the WTO dispute was India’s failure to subscribe to the OIE’s regionalization protocol.

The 2015 outbreak required the slaughter of poultry almost exclusively on farms that produced eggs and turkeys. USDA reported that US egg and turkey production in 2015 declined by 4 percent and 2 percent, respectively.

The third type of US poultry farm—raising chickens for meat—lucked out thanks to regional geography. Georgia, North Carolina, and other top states for chicken meat production are in the Southeastern United States. As these farms were outside the migratory path of the wildfowl that introduced the disease into the United States, they avoided infection and thus did not have to cull their chickens.

According to the USDA, US chicken meat production actually increased in 2015. This is important because chicken meat makes up roughly two-thirds of the value of total US poultry production.

Trade bans related to disease can be particularly devastating for two reasons. First, trade in unaffected products can suffer—the recent avian flu ban might also have extended to US chicken meat farms, for instance.

Second, trade bans historically remain in place long after the disease has subsided. Following the first known US cases of mad cow disease (bovine spongiform encephalopathy, or BSE) in December 2003, US beef was banned worldwide. Exports bottomed out in 2004.

US exports to Canada and Mexico resumed as disease concerns subsided, reaching pre-outbreak levels by 2006. Yet billions of dollars in potential US beef exports to other countries were lost. Japan and South Korea took much longer to remove their bans, and their beef trade with the United States did not reach pre-BSE levels for more than a decade.

The trading partner response was different this time

In 2015, the United States had FTAs with 20 countries—and these agreements significantly helped mitigate the impact of bird flu on US exports. Like beef, US poultry is a major export industry, logging more than $5 billion in annual foreign sales. Before the outbreak, US poultry exports—including eggs, turkey meat, and chicken meat—were split fairly evenly between countries the United States has a free-trade agreement with and those it does not. By and large, trade with non-FTA partners is guided only by WTO rules; like India, many of those partners do not yet engage in as much regulatory cooperation with the United States.

Overall, US poultry exports declined by more than $1.5 billion in the 12 months after the final bird flu case was reported in June 2015. The graph below shows how FTAs factored in: 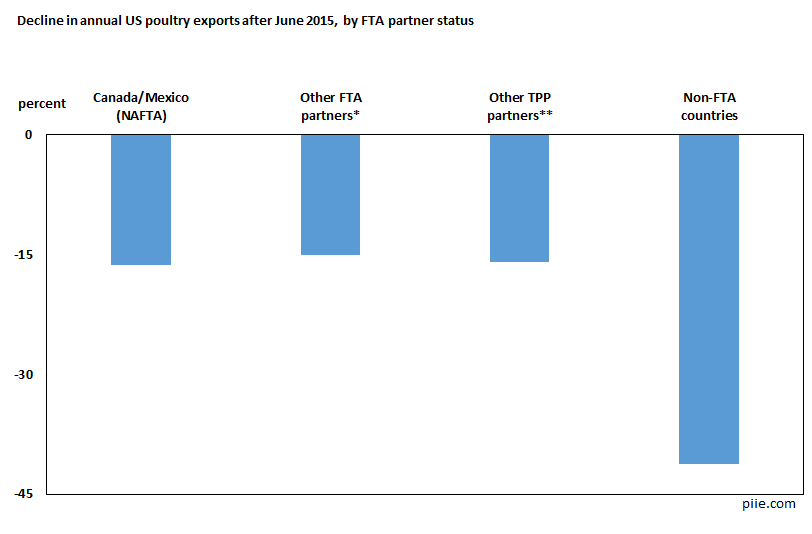 How do the newer free trade agreements actually help?

For example, the United States and Canada signed a 2013 agreement on animal-disease zoning whereby each would explicitly accept the other country’s regulatory decisions on regionalization in the event of outbreaks. During the 2015 bird flu episode, Mexico also adopted the US regulatory determinations that exports from certain US states were free of bird flu.

Even though Congress has yet to pass the TPP, this new agreement has introduced new forms of regulatory cooperation for agriculture beyond that found in the WTO. The process of negotiating the agreement has also meant regulators in other TPP countries had been engaging with USDA counterparts and building trust before the 2015 outbreak.

This engagement likely made regulators in Japan and Vietnam more willing than those in non-TPP countries to follow the regionalization protocol during the 2015 outbreak.

The effectiveness of any public health response depends on stopping the disease outbreak early and upon discovery. The worst case scenario involves a farmer hiding an outbreak from authorities and the disease spreading further.

The safe and timely resumption of international trade after the quelling of an outbreak offers positive feedback to farmers. Knowing that the market will be reopened—once the outbreak is contained—encourages the farmer to report and address an outbreak in the first place.

These lessons also apply to foreign farmers and help protect US consumers. When foreign disease outbreaks occur, a US policy that closes and reopens US markets based on scientific evidence helps reassure US consumers worried about the safety of their imports—and encourages transparency and reporting abroad.

Rebuild the Trans-Pacific Partnership back better

The US retreat from East Asia is costly