Following the failed Free Trade Area of the Americas (FTAA) initiative in 2005, several Latin American countries turned inward to their internal markets with little evident interest in integrating into the global economy. On the other hand, several countries on the Pacific coast of the Americas have embraced the idea of bolstering regional integration. Prime among these are Chile, Colombia, Mexico, and Peru who formed the Pacific Alliance (PA) in 2012, which aims to liberalize and harmonize the movement of labor and capital. The success of the Pacific Alliance is in its careful approach to advance the objectives of a like-minded group of countries, while not binding its members to unrealistic goals that may have characterized the FTAA. The PA has plans for expansion, with Costa Rica approved to join. Three of the Alliance members are also involved in negotiations for the Trans-Pacific Partnership (TPP).

Interest in the PA has been intense, with more than 30 countries becoming observers to the initiative. One such country is Canada, where a conversation has taken place regarding the benefits of potentially joining this bloc. Canada has existing free trade agreements (FTAs) with all members of the Alliance, which means its trade relationships are already liberalized in several areas. The figure shows the coverage of main issues in these bilateral FTAs, comparing the coverage within the Pacific Alliance. The obligations in the four FTAs are based on a coding exercise where similar commitments receive an index score of 1.0, while additional commitments receive greater weights. As the figure shows, core measures on market access to goods, services and investment are similar in scope. But the one area in which the Alliance provides greater liberalization than Canada is in labor mobility and the free movement of persons—beyond the customary FTA provisions on temporary preferential entry for business people, students, and other workers. In practice, to join the Alliance, Canada would have to eliminate its visa requirements for nationals of all Alliance members—a reform that would be beneficial in economic terms but seems politically unlikely in the near-term. However, as Kotschwar (2015) explains, the Alliance still provides important strategic and financial opportunities for Canadian companies investing and trading with Latin America.

Comparison of coverage in Canadian bilateral FTAs versus the Pacific Alliance 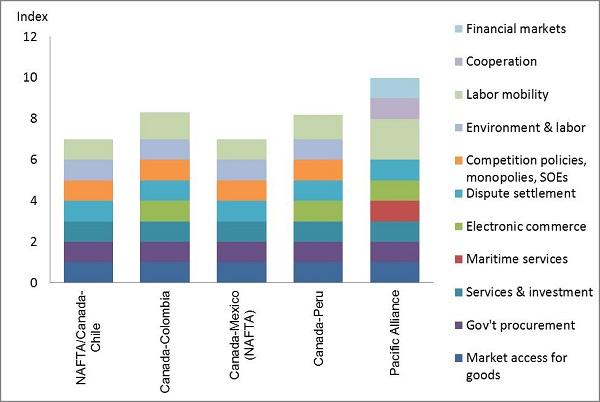 NAFTA = North American Free Trade Agreement; SOEs = state-owned enterprises Note: Cooperation in Canada’s bilateral FTAs refers to trade-related cooperation. This can include bilateral efforts to share information on technology and innovation, support activities of small and medium enterprises, and other activities to increase countries’ competitiveness. Cooperation in the Alliance includes customs cooperation as well as extra-FTA cooperation activities such as sharing of trade promotion resources within embassies. Source: Kotschwar (2015); author’s calculations, based on SICE data.

Will Pelosi Allow a House Vote on USMCA?

The USMCA, Newly Jeopardized, Was Never a Free Trade Agreement